Want To Keep Your Brain Sharp? Take Care Of Your Eyes And Ears 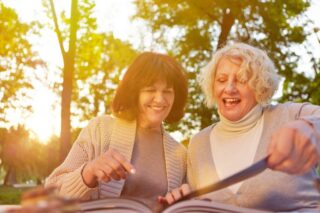 By age 40, about 1 in 10 adults will experience some hearing loss. It happens so slowly and gradually, says audiologist Dina Rollins. “You don’t realize what you’re missing.” And even as it worsens, many people are in denial.

By the time someone is convinced they have a hearing problem, age-related memory loss may have already set in. But there’s good news. Restoring hearing with hearing aids can help slow down cognitive decline.

Consider these findings: Researchers tracked about 2,000 older adults in the U.S. both before and after they started using hearing aids. The adults were participants in a big, national study called the Health and Retirement Study.

“We found the rate of cognitive decline was slowed by 75 percent following the adoption of hearing aids,” says Asri Maharani, a researcher at the University of Manchester in the division of neuroscience and experimental psychology and an author of the paper. “It is a surprising result,” Maharani says. The study was published this spring in the Journal of the American Geriatrics Society.

To assess cognition over time, researchers performed a battery of face-to-face tests with participants. This was done every two years from 1996 to 2014. One test to assess memory required participants to recall a list of 10 words, both immediately after the words were read aloud and then again after the participants had been distracted by other tasks.

“We weren’t expecting that hearing aid use would eliminate cognitive decline. That’s just not going to happen” because age-related decline is inevitable, explains Piers Dawes, an experimental psychologist and another author of the study. “But the reduction in the rate of change is quite substantial. It’s a very intriguing finding.”

To put the findings in context, consider that the slower rate of decline equates to remembering less than one more word on the 10-word recall test. So it’s a small but measurable effect. And it adds to the evidence that hearing loss and cognitive decline are strongly linked.

It makes sense, says Rollins. Consider what people are getting when their hearing is restored: “Stimulating your ears stimulates the nerves that stimulate your brain.”

When you get hearing aids, “we’re giving your ears back what they’re missing, and giving your brain what it needs to make sense of what you’re hearing,” Rollins explains. And this can help you stay more stimulated and socially engaged. Rollins was not involved in the study. She’s in practice in Silver Spring, Md.

Rollins says people who have hearing loss might decline faster than those with normal hearing due to the loss of social stimulation. “Social isolation is a huge part of hearing loss, and people will notice their loved ones withdrawing from conversation, or not going to family or social functions like they used to.”

Rollins fits a lot of people with hearing aids, and sometimes they come in only after their loved ones insist on it. “No one wants to wear a hearing aid,” Rollins says. “Typically, there’s convincing that needs to be done.” There’s still a stigma attached to wearing hearing aids. People think: “I don’t want to look old!” But Rollins says the technology has improved a lot in recent years. And often, hearing aids are a lot less noticeable and are covered up by hair.

Cost is another obstacle. With a price tag of $4,500 and upwards for high-end aids, they’re not cheap. Less expensive options are available, but insurance plans typically don’t cover the full cost. Some plans offer no benefit for hearing aids, and, in general, Medicare does not cover the cost, either.

“I was tired of screaming,” his wife, Carrie Johnson, tells us. And it was frustrating for Lucien as well.

“Sometimes she thought I was ignoring her,” Lucien says. But, really, he just didn’t hear her speaking.

The Johnsons say they’re communicating better now. Lucien went in to see Rollins for an adjustment recently. “I need some fine-tuning,” he told her. “But so far, so good.”

Another common condition as we age is the deterioration of vision, often because of cataracts.

New evidence shows that restoring vision by having cataract surgery can also slow cognitive decline. A companion study carried out by the same researchers and published in the journal PLOS One this month evaluated the outcomes of about 2,000 older adults who had cataract surgery. They were all participants in the English Longitudinal Study of Ageing, which is carried out similarly to the U.S. Health and Retirement Survey. Participants are given periodic cognitive assessments.

“We found the rate of cognitive decline was slowed by 50 percent following cataract surgery,” explains Maharani. As with the outcome in the hearing aid study, restoring good vision can’t eliminate cognitive decline, but this study suggests it can significantly slow the process.

So many factors influence healthy aging, including lifestyle habits such as diet and physical activity. But Maharani and her co-authors say it’s important to know that steps to correct vision and hearing loss can play into the equation as well.